If you look closely at the middle top portion of this map of County Mayo, you can find the location of the town known as Killala, birth place of the Boland Family. Killala has a population of only 500 people, which makes it great for me because it will be easier to trace records of the family in this town. As a matter of fact, I contacted the diocese of Killala recently for the baptism records of Agnes Bridget Boland and the marriage records of John & Ella Boland. If you look south of Killala, you will discover the town of Ballina, birth place of the Cafferty family and home of the Boland family just before they immigrated to the United States. Ballina has a population of 10,000 people.

You are probably asking yourself the question, "how did I know Killala was the birth place of our Bolands and Ballina is the last location where they lived before immigrating over to the United States?" The answer is in their ship records.

The last address listed in Ireland for Bridget Boland McCaffery was the residence of her step-brother Michael Doherty in Ballina, County Mayo Ireland. This was the same address listed for all the Bolands with the exception of Bernard & Mary Boland Cafferty whom lived in Ballina at the time of their immigration but not with Michael Doherty.

Ella (Ellen) Boland was born Ella McCarrick. She married Michael Doherty and had at least one child before her husband died. That child was Michael Doherty. Ella McCarrick Doherty then married John Boland and as far as I know they had four children together. However, I have questioned whether or not the child known as Mary Boland Cafferty was a Doherty or a Boland? Bernard & Mary married in Ballina, County Mayo Ireland and their first child Michael Cafferty was born in Ballina before the family immigrated to the United States.

If I can locate the marriage records of Bernard & Mary Cafferty, then that question would be answered.

At this time, I do not know if Michael Doherty ever immigrated to the United States but I believe he remained in Ireland.

Killala, County Mayo Ireland was a seaside village located at the Killala Bay. During the famine, the village was hit hard. While researching this town, I came across an article which stated that over 140 bodies layed out on the roadside and were buried in a mass grave during the Great Famine. It should also be noted that the town of Ballina was also hit hard during the famine. Ballina had vast farmlands.

Other background history of Killala;

Killala is a picturesque seaside village six and a half miles North-West of Ballina in North County Mayo, famous in Irish history for the part it played in the 1798 rebellion.
History
In August of 1798 General Humbert arrived into Kilcummin pier from France and combined with the Irish forces against the English forces in the area. This year is chronicled in Irish history as the Year of the French and a book and television history celebrate this unique event.
Consequently, Killala has become a popular location for the historian and in fact was used as a major location for the 1981 multi million pound film "The Year of the French". In 1998 Killala celebrated the bicentenary by twinning with a town in Chauve in France.
Killala's skyline is dominated by a round tower, dating to the twelfth century. There is a Church of Ireland cathedral, which was built in the 17th century over the remains of a ruined Catholic cathedral.
The area is rich in archaeological remains such as:
Moyne Abbey
Rosserk Abbey
Rathfran Abbey
Meelick Castle
Humberts Rock
Céide Fields (the oldest enclosed farms in the world) are a short distance away near Ballycastle.
Posted by Patricia Marie at 10:36 PM

My Boland family were from Kilcummin. Some still live close.

Sometimes, I ask myself the same question. I am a Therapist. I work with the Addiction/Mental Health population. I was a Lab Supervisor in a previous life. I am a genealogist, love to travel and explore, wrote a few articles and books, have strong opinions, decided I was really Catholic despite my everlasting internal turmoil as it pertains to my religion, spent 12 years in Catholic school including an all Girl Catholic High School, over-educated graduate of Drexel University College of Medicine who continues to take classes at Bryn Mawr College, married 23 years that produced three sons and ended in divorce. Remarried. Grandmother of two grandsons and two granddaughters. I am sensitive. I love deeply. I am great at hiding my emotions until they pop out on my sleeve, I tend to work long hours, burn-out, then start all over again. Other than what I stated above, I have been a blogger since 2005. 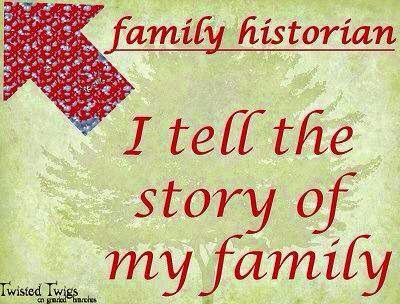 This work is licensed under a Creative Commons Attribution-Noncommercial-No Derivative Works 2.5 License.